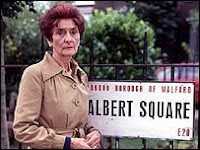 EastEnders legend June Brown has revealed that she had been campaigning for John Altman's return to the BBC soap for over five years.
Earlier this year, the 81-year-old spoke out about how her Walford counterpart Dot Cotton needs her son Nick Cotton back in her life and is now very happy that John Altman, who plays him, has been asked to make a comeback by the soap's bosses.
Speaking on Scottish radio station Larnarkshire FM, she said: "He's coming back and because he's doing a pantomime, which was already booked, he has to go off for a couple of months and then he comes back again."
She added: "I'm so pleased because I've been fighting to get him back for at least five years and I've finally succeeded."
Source Digital Spy
Email Post
Labels: Dot