Love Rat Max Out Of Coma 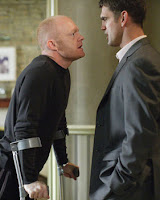 The Branning war gathers pace next week as injured Max makes a shock return to Walford.

He wakes from a coma to discover his wife Tanya has been charged with his attempted murder.

So Max discharges himself from hospital and it is not long before he reignites his feud with brother Jack.

The two men square up to each other as Max kicks Jack out of the family home and moves in himself.

With Tanya in jail, Max wastes no time in getting his feet firmly back under the table.
Jack is forced to move back into his flat with old flame Ronnie Mitchell.

A show insider said: “Max is like a man on a mission, he wants to unite his family once and for all. “He doesn’t believe Tanya tried to kill him, so pulls out all the stops to convince the police.”