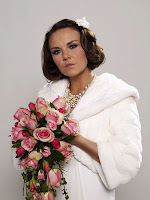 EastEnders returnee Charlie Brooks has revealed that she is 'very happy' to have made a more permanent Walford comeback.

The 27-year-old returns to screens on December 18 in a storyline which sees her character Janine Butcher posing as a Jewish bride called Judith Bernstein. Earlier this year, Janine made a brief reappearance on the Square for 'Frank Week', a bank of episodes dedicated to late comedy legend Mike Reid.
Speaking of her return, she told DS: "After I returned to do Frank's funeral, the tribute to Mike Reid, Diederick [Santer], the gorgeous man that he is, sent me a text quite soon afterwards saying 'can we talk about you coming back to the show?' and I agreed to go in for a chat…
I've always wondered what Janine's been up to since we last properly saw her."
"It's a pleasure to be back," she continued. "It was quite a big decision - it's a complete life change. I've got a little girl [called Kiki] but it's a decision that I have to say I'm very happy I made.
It's working out extremely well with Kiki, the schedules - everything's just working."She added: "I'm back for a year at the moment. I don't know [about anything longer]. We'll see how it goes on both parts."
Source - Digital Spy
Email Post
Labels: Janine