EastEnders superbitch Janine Butcher returns to our screens next week in typical Janine style. If you've not then in a nutshell, Janine - or should I say her nom de plume Judith Berstein - is marrying an old Jewish man called David.

Janine's actually spent years converting to Judaism and all's going to plan - until Ricky, Billy and Pat spot her in a Jewish newspaper. Ricky and Billy are determined to be there for the nuptials, but Pat's not so sure. Without invites, both Billy and Ricky turn up at the synagogue - and it's not long before Pat turns up to throw a whole selection of spanners in Janine's long-term con.

After all, Janine's typically only in it for the money.As you can see from my picture below, Janine loses it when Pat arrives and dishes out a tongue-lashing. And it's Pat's revelation about Janine which causes her husband David to have a heart attack.


But one question remains following his death - did Janine do enough to secure a prominent place in his will? 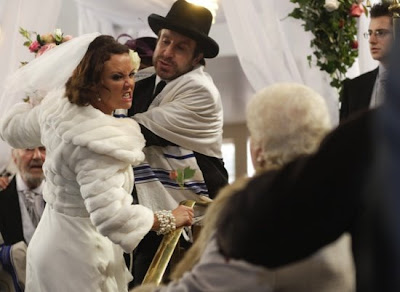