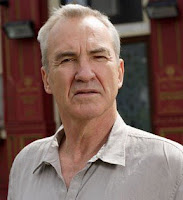 The 64-year-old's counterpart Archie Mitchell, who viewers first saw when Albert Square headed to Weymouth, quickly unsettled the Mitchell family not only by his immediate presence, but by proposing to his sister-in-law and Queen Vic landlady Peggy.

Speaking of Archie's menacing ways, Lamb told DS: "There are still things emerging. He's somebody who's made a lot of mistakes in his past, wanting everybody to come up to speed and not still deal with him the way they knew him back then.

There's an element of misunderstanding with Archie, but Ronnie's obviously been so badly stung by him."Back in October, Archie called off his engagement to Peggy after Pat cajoled Peggy into testing his trust, resulting in him postponing the wedding indefinitely.

However, the actor teased: "Wedding bells are very definitely in line for the New Year. He's called it off, though and at the moment, they're friendly but they're living under a flag of truce with an element of mystery lurking.

Lamb added: "The crux of Christmas week for Archie is that he's woven so many webs that he's becoming terrified that something's going to unravel and he's going to be seriously exposed for what he's been cooking..."

Anonymous said…
Hello Larry, I feel a bit stupid but I knew you when you were in Harlow. We both attended Cook's Spinney infants and junior school. I remember a christmas party where you and I had a kiss, and you became my first boyfriend. We also frequented the Quarry, a place to go in 'early Harlow'. I went to College with Wesley, he in the Art Class and me in the Catering side. My name is or was Glynis Fairbrother, It was great to see that you had made a mark for yourself all the very best Glynis x
Saturday, 21 February, 2009

Patricia Parker, Tradewinds Realty Contact: 902 275 8112 said…
Dear Anonymous
Do you know where Wesley is these days, much easier to keep track of Larry. I am an old friend from Canada.
Quid Nunc
Tuesday, 13 October, 2009