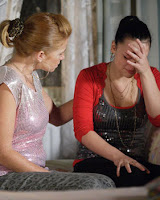 It looks like evil paedo Tony King finally gets what’s coming to him when he is arrested by cops.

The ex-prisoner’s relationship with schoolgirl Whitney Dean is exposed when she tells step-mum Bianca they’ve been sleeping together at her sixteenth birthday party.

Tony has been abusing the youngster since she was 12.

The redhead then confronts her fiancé Tony who tries to convince her the teen has got confused.

But wise Bianca doesn’t believe him and calls the cops, who arrest Tony as he tries to flee from them in the Square.

Later, an angry Whitney berates her step-mum for what she’s done – but Bianca explains that Tony has been taking advantage of her.

Watch the drama unfold on Tuesday, December 9 at 7.30pm on BBC One.