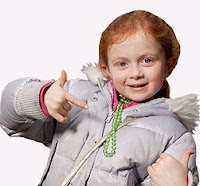 EastEnders star Maisie Smith has admitted that Patsy Palmer is like a real mother to her on the set of the BBC soap.
Speaking to the Essex Echo, seven-year-old Smith, who plays Bianca Jackson's youngest daughter Tiffany, said: "I love being on EastEnders. I really get on with Patsy. She looks after me so well. It’s like I’m her real daughter some days.
"Everyone is really nice. Pam St Clement, who plays Pat Butcher, is also really lovely to me."
Smith added that her Albert Square experience has convinced her to follow acting as a full-time career.
She said: "I'm glad I get to be cheeky and say some funny lines. I would never want to be a goody goody. It’s strange people point at me in the street now and ask if I’m the girl from EastEnders. All my friends think it’s great I’m on television. I think I will want to be an actress forever now."
Her father Steven remarked that Maisie's fiery on-screen persona is "an exaggeration of her own personality. She’s a little madam sometimes, both on and off screen".
Source - Digital Spy
Email Post
Labels: Bianca Tiffany Dean