Rob's A Brit Of A Movie Star 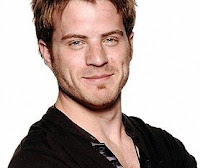 Hunk Rob Kazinsky will swap Walford for the silver screen after landing a movie role.

The actor, who plays Sean Slater, only filmed his final scenes last month.But he has already been lined up to star in a new Brit flick after he called on his alter ego’s fiery nature to help land him the part.
Rob, 25, told the Daily Star he got the part after arguing with the producer.Poor He laughed: “I had a meeting with a very important person and ended up rowing with him about the state of the British film industry.
“I think it is shameful that we have extremely talented actors in this country and they are not hitting the big time because the industry over here is so poor.
“Why should we have to crack America to have a career in the top flight? It’s ridiculous.”
Rob is also set on carving out a career behind the camera and has written a script for his pal, Prince Caspian star Ben Barnes, 27.
Rob said: “He’s the perfect leading man. Although I think he would be too expensive now!”
Source - Dailt Star
Email Post
Labels: Sean Slater