Alexandrou: 'Wendy was my second mum' 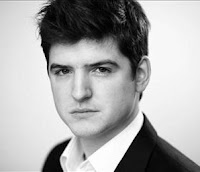 Former EastEnders actor James Alexandrou today paid tribute to his late screen mother, Wendy Richard.
The 23-year-old - who played Pauline Fowler's son Martin Fowler for 11 years - spoke to Eamonn Holmes and Ruth Langsford on This Morning about yesterday news of Richard's death.
He said: "To me, she was mummy number two. She was lovely, caring and always honest.""I was glad to send her a Mother's Day gift each year," he added. "She liked that. I never wanted to believe she was ill. She was tough as old boots and I thought she would be OK... I collapsed yesterday when I heard the news."
Alexandrou announced his decision to quit the Walford-based soap in April 2006, only days after screen partner Natalie Cassidy (Sonia Fowler) decided to 'take a break' from the programme.
In the August, their departure was brought forward and the pair left two months after Richard's character Pauline was killed off during the 2006 Christmas episodes.
Source - Digital Spy
Email Post
Labels: Martin Fowler Sonia