Bianca's at her Whit's End 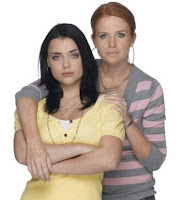 Bianca is left reeling when misguided Whitney turns up to a family dinner accompanied by a police officer.

The fiery mum is aghast when step-daughter Whitney shows up to the special dinner with the police officer after being caught stealing
Bianca and Ricky had planned to have a family dinner after DNA tests revealed that Ricky is Tiffany's father when Whitney - who thought she shared the same father as Tiffany - rudely interrupts.
The family protest but troubled teen Whitney is left shame-faced when the escorting officer opens Whitney's bedroom door to find a bevy of stolen goods - somewhat ruining the ambience in the process.
Click Here For Pictures
Watch Whitney's fresh drama on Friday 20 February at 8pm on BBC One.
Source - The Sun
Email Post
Labels: Bianca Whitney