Brooks 'blessed' to be working for 'Enders 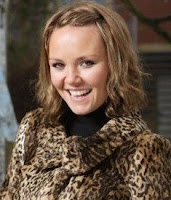 EastEnders actress Charlie Brooks has said that she feels 'blessed' to be working for the soap in the current economic downturn.

The 27-year-old returned to the Walford-based show at the end of last year in a storyline which saw her character marrying an older man in a traditional Jewish ceremony.

Speaking on This Morning today, she said: "I'm so happy. I feel blessed to have a job in the current economic climate and things are falling into place for me.

"I love the EastEnders cast. I was 17 when I first joined and a lot has changed since then, but Janine is still as fun to play."

Speaking of her four-year-old daughter Kiki, Brooks added: "[S]he's a real drama queen... I think she may follow in her mum's footsteps!"