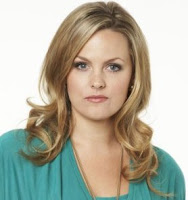 There's no champagne on the menu for Tanya Branning after she receives a suspended prison sentence.

The blonde, who confessed to the attempted murder of estranged husband Max to cover for daughter Lauren, has nothing to celebrate.

She does her best to act surprised when daughter Abi organises a birthday party for her but, sadly for the youngster, her heart is just not in it.

Best friend Jane Beale does her best to try to convince Tanya that she must pull herself together for the sake of Abi and son Oscar.

She then manages to summon the strength to assure Abi that everything will be OK by giving her a hug, even though she doesn’t believe it herself.

An EastEnders insider said: “When Tanya sets off for her court appearance she’s convinced she’s going down for at least a year for perverting the course of justice.

“Jane and Max are frantic when they don’t hear anything from her all day. Jane goes out looking for her and is relieved to find her sitting in the café.

“But Tanya tells her she may as well be in prison as all she wants is Lauren to come home.“It’s a really sad state of affairs but Jane manages to persuade her to come home as Abi has organised a party.

“Tanya does her best to act like everything will be fine but in her heart she knows that with Lauren’s own court appearance hanging over them it’s a long way off yet.”

Fans of the hit BBC1 soap will be able to watch the emotional scenes as Tanya returns home from court on Friday February 20.