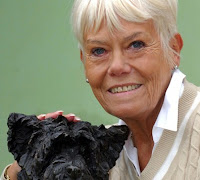 The actress died with her husband John Burns by her side at the Harley Street Clinic, according to her agent Kevin Francis.
The star revealed that she was suffering from an aggressive, terminal form of cancer last October. She married burns, her lover of 13 years, in a ceremony later that month.
"She was incredibly brave and retained her sense of humour right to the end," Francis told the BBC.
Richard's former soap co-star Shane Richie told The Sun that he was "devastated" by the news. "My heart goes out to John, Wendy's husband and her family," he said.
Richard played Pauline Fowler in EastEnders between 1985 and 2006, making her one of the longest-ever running cast members in the show. Her other famous roles included Miss Brahms in Are You Being Served and Grace & Favour and parts in Dad's Army and The Likely Lads.
Her most recent TV acting appearance came as Mrs Crump in ITV's Miss Marple: A Pocket Full Of Rye last year.
Source - Digital Spy
Email Post
Labels: Pauline