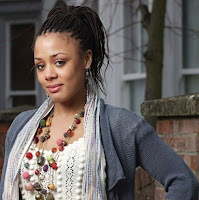 New EastEnders actress Nina Toussaint-White has admitted to a history of drugs, violence and alcohol on social networking site MySpace.

The 23-year-old actress - who joined the BBC soap last week as Bradley Branning's new love interest Syd Chambers - branded herself as "Nina the nutter", before going on to reveal that her favourite pastimes included "acting, keeping fit, eating and most importantly getting w**kered".
Although having not visited the site for at least a year, her profile page featured admissions to having used cannabis and having beaten someone up.
Other confessions included that she swore too much and that her favourite drink was vodka and apple juice.
The actress's agent told The Mirror: "[Nina] has not used this internet site for over a year."
They added: "[She] was immature and naive when she created her profile and she has grown up a lot since she last used the site and is focused on making a success of her career."
An EastEnders spokeswoman said: "This is a private matter for Nina."
Earlier this month, Kara Tointon - who plays Dawn Swann - found herself at the centre of a Facebook fakery incident when a user set up a bogus account in her name and began to
impersonate her.