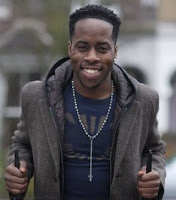 EastEnders newcomer Rolan Bell has revealed that co-star Don Gilet's comedic nature helped him settle in at the soap.
In a recent interview with DS, the 25-year-old, who began filming as the mysterious Theo Kelly last month, described Gilet's sense of humour as having a calming effect that helped to ease him into the daunting task of joining such a large, established cast.
He said: "It's been great. They're absolutely fantastic actors and great people off-screen, too. Don [who plays Lucas] is unbelievably funny. He's the type of person who can make a joke of any situation, even dust floating around! That's been one of the most calming things for me.
"It can be quite daunting when you start at somewhere like EastEnders, so it's been great to have such a great bunch of people to work with. Rudolph [Walker]'s been a great mentor, too. They're all amazing people over there."
Theo first appeared on screen last week in search of Patrick Trueman (Walker). His ulterior motives have yet to be revealed.
Click Here To View Rolan Bell's Interview with Digital Spy
Source - Digital Spy
Email Post
Labels: Theo Kelly