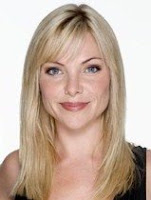 Samantha Janus says she has "butterflies in her tummy" about her springtime marriage.

The 'EastEnders' actress - who plays Ronnie Mitchell in the soap - is set to wed her long-term partner Mark Womack, after they got engaged earlier this month. The couple are planning to hold a ceremony in spring.

Samantha said: "I am really excited. I have got loads of butterflies in my tummy. I would like to have a full traditional wedding with a vintage theme if possible, kind of vintage and classic. Sleek and elegant, more like1920s-style."

Samantha and Mark met on the set of drama 'Liverpool 1' ten years ago and the couple have two children together, Benjamin, born in 2001 and Lily Rose, born in 2004.

Samantha previously revealed how Mark had proposed to her during a trip to a flea market Paris.

She also revealed she thinks her character Ronnie will find out the truth about Danielle Jones being her long lost daughter.

She added: "I think the truth is definitely coming but not that quickly. I think it's a slow burn, which is what we want because it's really taken hold this storyline and people are really interested in it. I think the audience like that."