Sid: Give Ricky a girlfriend and make Bianca jealous 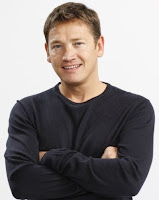 EastEnders stalwart Sid Owen has said he wants his character Ricky Butcher to get a new girlfriend.
He reckons Ricky could make his onscreen love interest Bianca Jackson jealous by finding romance elsewhere.
The actor — who returned to the BBC1 soap with flame-haired Patsy Palmer as Bianca last year — admitted he would love the pair to get back together in the end.
But he said it would make even better telly if bolshy Bianca had to put up with a love rival.
Sid, 37, said: “They’re as good as together anyway because they live together.
“They’re doing everything together — apart from sleeping together.
“They’ve always got a bond, and now they’ve got two kids together.
“I’d like Ricky to get back with Bianca. If he does meet another girl then the roles would reverse — she would be the jealous one for once!”
Source - The Sun
Email Post
Labels: Bianca Ricky