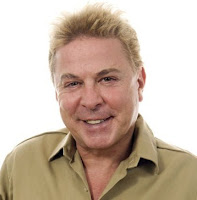 David Van Day wants to appear in EastEnders.
The Dollar singer and I'm A Celebrity... Get Me Out Of Here! star has declared the BBC soap his favourite and the best, and would love to have a role in Albert Square for himself.
David said: "I'd like my own game show/reality show. But eventually I'd like to do a bit of drama. I trained as an actor - a classical actor - and it would be nice to get in one of the soaps.
The best one I suppose is EastEnders. It would be nice to do something like that. It would be change for me. 'Hello Peggy I'm back!'"
The former singer says misses music, but the industry isn't the same as when Dollar was a hit in the 80s.
He said: "Do I miss it? Yes and no, but it's such a transient business these days. There's no Top Of The Pops and half the time people don't know what a hit is, who's having hits.
"I'll probably do a bit more, if there are some opportunities for me to do some solo stuff. Probably in a temporary fashion, just do covers, whether it's swing music or some love songs, who knows.
"I wouldn't rule it out."
Source - MSN
Email Post