Danniella in return to Enders? 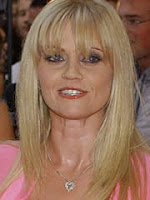 EastEnders bosses are in talks to bring back vixen Sam Mitchell — and could ask Danniella Westbrook to play her.
Soap chiefs came up with the idea to cause havoc for Sam’s former hubby Ricky Butcher and his ex Bianca.
Danniella, 35, left the BBC1 show in 2000 after a battle with cocaine addiction, and Kim Medcalf later took the role.
But bosses have mooted the idea of bringing back Danniella to give viewers a “shock”.
A show insider said: “She was the original Sam and the chemistry with Sid Owen as Ricky was exciting stuff.
“If she returns it will be the talk of soapland for months.”
Sid and Patsy Palmer, who plays Bianca, have already returned and Charlie Brooks is back as Janine Butcher.
The source said: “This would hark back to the Albert Square brat pack — Ricky, Bianca, Janine and Sam.” The character was last seen in 2005 after being falsely jailed for Dirty Den Watts’s murder.
Brothers Grant and Phil proved Chrissie Watts was the real killer — but Sam fled to Brazil to escape a four-year sentence for perverting the course of justice.
Mum-of-two Danniella, married to businessman Kevin Jenkins, last appeared on telly in ITV1’s I’m A Celebrity in 2003.
She said then: “These days I live an ordinary life. I work occasionally, but I also do the school run and make dinner.”
There is an earlier example of an actress returning to a part after someone else took over the role.
Barbara Bel Geddes quit as Miss Ellie Ewing in Dallas in 1984 — but came back the next year after Donna Reed had played the part for a season
Source - The Sun
Email Post
Labels: Sam Mitchell