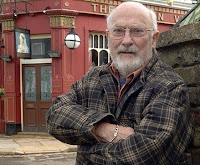 Equalizer legend Edward Woodward has a dark secret to hide when he arrives in Albert Square as mysterious Tommy Clifford next week.
In the 78-year-old actor’s first EastEnders scenes he questions Patrick Trueman about his early days in London — supposedly for a book he’s writing.
But the charming gent makes Patrick flip when he spots a newspaper article with the headline “Girl dies in fire” in his bag.
It becomes clear he has an ulterior motive for tracking Patrick down.
An EastEnders spokeswoman said: “Tommy wants to lay something to rest. There is something which connects them from the past that will soon start to unravel.”
Edward enjoyed huge success as Equalizer troubleshooter Robert McCall in the 1980s TV classic.
Source - The Sun
Email Post
Labels: Patrick Trueman Tommy Clifford