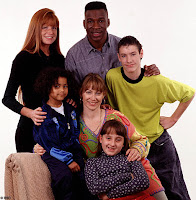 EastEnders chiefs are hoping to lure the Jackson family back to Albert Square, a report claims.
The plan would see Dean Gaffney (Robbie), Natalie Cassidy (Sonia), Lindsey Coulson (Carol), Howard Antony (Alan) and Devon Anderson (Billy) reunited on-screen for the first time in twelve years.
Patsy Palmer has been a hit with viewers since reprising her role as Bianca Jackson on the BBC One soap in 2007.
"Bosses believe bringing back the entire clan would be fantastic for viewing figures," a source told The People. "And it would allow more storylines involving Bianca, particularly as she has been so popular since her return."
Palmer called for the return of her on-screen mother Carol last month. However, Coulson has previously ruled out an Albert Square comeback.
The insider added: "At the moment, without Lindsey onside, Natalie Cassidy is top of the priority list and bosses are confident she will want to return. Once she is back, it paves the way for the rest of the family to follow, with or without Lindsey."
A BBC spokesperson confirmed that producers were "thrilled" by Palmer's return, but denied plans for a Jackson family reunion.
Source - Digital Spy
Email Post
Labels: Alan Bianca Billie Jackson Carol Jackson Jackson Robbie Jackson Sonia