Heathers Is Pregnant But Won't Name The Dad 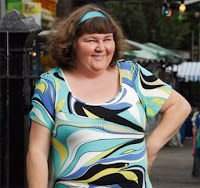 EastEnders fave Heather Trott is set to announce she has a bun in the oven — but refuses to reveal the identity of the dad.
The big-hearted launderette worker clams up because she is sick of her pals sticking their noses into every detail of her love life.
Even her best mate Shirley Carter is kept in the dark along with viewers — setting up a classic soap whodunnit storyline.
Cheese addict Heather, played by Cheryl Fergison, 44, has no plans for a baby and is stunned to discover that she is expecting.
A show insider said yesterday: “Heather’s love life has never gone smoothly so when she finds out she is pregnant she is really shocked.
“The question everyone wants answered is, ‘Who’s the daddy?’. However, Heather’s a bit shy about her love life and isn’t keen to let her meddling mates know who has done the deed.”
Despite all the pestering from her friends in Albert Square, she is thrilled by the pregnancy and determined to keep the baby.
The source added: “Heather’s got a lot of love in her heart and she loves children. She’s absolutely thrilled by the news. Last year she wed Minty Peterson but their marriage was annulled after he told her he didn’t find her sexy.
It might not be perfect and it definitely wasn’t planned but she wants the baby and says it’s going to be the most loved tot in Walford.”
Heather’s love life has been notoriously unlucky.
The humiliation continued last month when barmaid Shirley arranged for them to go on the pull together at local nightspot R&R.
Determined her chubby friend should feel she was attractive to men, Shirley secretly hired a male escort to chat her up.
But as her chuffed mate found herself being wooed by a hunk, nosy Dawn Swann waded in and informed her that the man was a gigolo.
Devastated Heather fled the club — just before the real escort showed up, revealing the first bloke to be genuine.
The pregnancy storyline kicks off on the BBC1 soap this spring.
Source - The Sun
Email Post
Labels: Heather Trott Shirley