Jane and Masood decide to take a break from their respective partners and share a plate of chips in the café. As they descend into talk about their fears and dreams, they're getting on like a house on fire. Before they know it, they're holding each other's gaze.

With a number of other similar 'moments' during the same week - and beyond - could Masood end up being Jane's next Grant?

Though having said that, the thought of Masood and Jane copulating in the Masala Queen unit is enough to put anyone off their curry.

Don't get me wrong, I love Laurie Brett and Nitin Ganatra, but here's to hoping that the characters have simply found common ground - in that they both have cantankerous spouses. 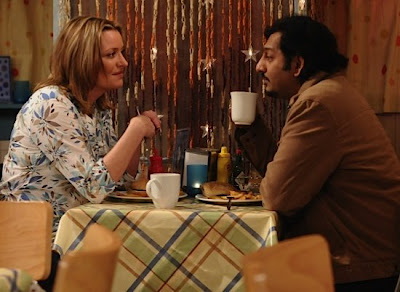 These scenes air on Monday 9 March at 8pm BBC 1