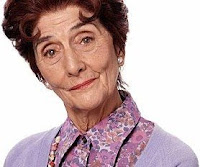 Cash-hit EastEnders chiefs have slashed scenes involving Dot Cotton — because they can’t afford actress June Brown’s wages.
The soap icon revealed that the BBC show is having to use more scenes involving cheaper, younger actors to survive the credit crunch.

June, 82 — up for a best actress Bafta this month — told The Sun: “I’m not due back until May. It’s to do with the recession. They could afford ten kids and five dogs for the price of me.”

The veteran, who joined the show after its 1985 launch, is believed to have raked in a salary of over £370,000 in recent years.

Like all EastEnders stars, she earns a basic wage boosted by the number of episodes she appears in.

A show insider said: “Using fewer actors per episode is the most effective way of making cuts, but it’s usual for actors to take a break.”

A spokesman added: “EastEnders has to make savings. Every effort goes into continuing to make a high quality show.”

But June has seen her scenes dwindle following the departure of co-stars such as Natalie Cassidy, who played step-granddaughter Sonia.

June said: “Every time I get some family, they take them. Dot has nothing to do. That’s the problem.”

June’s Bafta nod is for an episode last year in which she taped memories for ill husband Jim to listen to in hospital.

She is the first soap actress in the category since Jean Alexander in 1989 for playing Corrie’s Hilda Ogden.

June said: “I won’t even buy a new dress because it doesn’t look right in the recession, does it?”