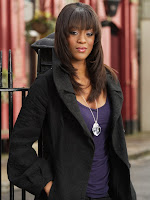 EastEnders star Tiana Benjamin has insisted that she doesn't object to her character's many kissing scenes.
The actress revealed that she tries to enjoy romantic moments as much as possible to keep her performances as Chelsea Fox believable for viewers.
"I haven't got a problem with it at all," Benjamin told The Sun. "I can't really afford to have a problem with it as I know Chelsea would think nothing of going over to a guy and snogging their face off!

"It can be a little bit strange when you don't know the other actor very well but sometimes that can help because you just get on with it."
Most recently, Chelsea has been dating newcomer Theo Kelly on the Walford-based soap.
Benjamin revealed: "From what we're watching at the moment we're going to see a lot more of Theo and it's going to get quite steamy but it also becomes more genuine."
Source - Digital Spy
Email Post
Labels: Chelsea Theo Kelly