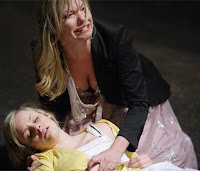 Soap fans have blasted EastEnders for killing off Danielle Jones — moments after revealing to Ronnie Mitchell that she was her daughter.
Thursday’s episode was seen by 10.5million people — making it the year’s biggest so far.
It saw the troubled teen die in the arms of her mum after being run over by Janine Butcher.
In a Sun Online poll, more than 90 per cent of users said producers had made a mistake by depriving the pair of a happy ending.
One raged: “Killing Danielle off after such a build-up was a cop-out — sheer laziness.”
EastEnders executive producer Diederick Santer said: “We didn’t deliver the happy ending many may have hoped for.
“Our aim is to deliver drama. That doesn’t always lead to a happy ending.”
Source - The Sun
Email Post
Labels: Danielle Janine Ronnie

Anonymous said…
please bring daniel back. just make it a dream. Ronnie dreams this. she wakes up realising it was just a bad dream. She then bonds lovely with her daughter. The Family then form even greater. COME ON PRODUCERS PLEASE LET THIS HAPPEN!!!!!
Saturday, 18 April, 2009

Anonymous said…
We can't bring Jade back, but we can bring daniel back. Just make it a bad dream by Ronnie. PLEASE!!!!
Saturday, 18 April, 2009

Anonymous said…
There is a chance Daniel could return because according to the profile on the Eastenders website she is nothing to state she is dead. Archy could have taken Daniel for the morge and found a pulse and changed the body and have Daniel under hostage. and then he couldd bring her back.
Its crazy - but is possible
Wednesday, 22 April, 2009

Andrew Lacey said…
It is Unfair of Ronnie screaming she's dead because it was the Producers blaming phill not to kill Archie to make it biggest storyline going on but 10.5-Million of us who is watching the Danielle Death as a Massive Mistake we did say Ronnie was mistaken Danielle is not dead and yes i know it was going to lauren Crace to have 9-week out to get ready for 25th-Anniversary to bring Danielle back and that it why Archie got his way of wanting Danielle Dead
Saturday, 09 January, 2010