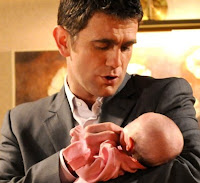 When Roxy refuses to let him see their daughter Amy as agreed, Jack threatens her with legal action!
Until now, Jack and Roxy have been getting on.

He's staying close to her so he can keep seeing Amy, while it appears the man-eating Mitchell might also have another ulterior motive.

Telling herself Jack is rich, handsome, the father of her baby and kind-of single, it seems like Roxy might be lining up her sister's ex for something more permanent!
When Jack asks to spend more time with Amy, Roxy is initially delighted ­ and they fix a play-date in the park.

But when Ronnie returns to Walford after Danielle's funeral, Roxy realises how fragile her sister really is.

Ronnie had already told her that she still loves Jack.

And when she now reveals that losing her daughter has made her consider suicide, it is clear to Roxy just how close to the edge Ronnie is.

Feeling guilty, she texts Jack and says she can't go through with their meeting.

Devastated, Jack makes it clear that he won't take this lying down ­ and tells Roxy he'll take her to court!