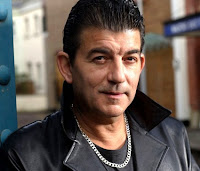 EastEnders bad boy 'Nasty' Nick Cotton loses the plot at the end of May when he holds a number hostages in the café as it burns to the ground.
With the help of his supposed daughter Dotty 'Kirsty' Cotton, Nick - played by soap returnee John Altman - continues in his attempts to persuade his 'Ma' Dot Cotton that she's going round the twist, with the aim of killing for her money and blaming her death on her mental state.
However, as Nick begins to feel the pressure of his actions, he quickly begins to lose his grip. At his lowest ebb, he becomes embroiled in a sudden fire which breaks out in Ian Beale's café on Bridge Street.
Caught in the drama, Nick spirals out of control and holds a group of as-yet unnamed locals hostage in the burning building.
Flame-haired Bradley Branning takes on the rescue mission, attempting to save those inside and deal with Nick in the process.
A source told DS: "It's not clear whether the fire is arson or an accident, but it is obvious that Nick's taken his plans to the next level - shocking himself in the process. The wayward Cotton can turn his hand to most things but like a cat with nine lives, who know just how many he has left?"
They added: "Will Dot finally accept that her son is rotten to the core? Or will she give him yet another final chance? If he survives, that is…"
EastEnders bosses are keeping tight-lipped as to the outcome of the blaze, save to confirm that Ian Beale takes the opportunity to refurbish his establishment with a "bright, retro and classic modern" feel.
The fire scenes are due to air at the end of next month.
Source - Digital Spy
Email Post
Labels: Bradley Dot Dotty Ian Nick Cotton