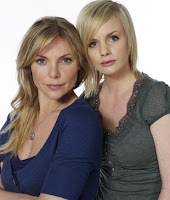 Tara Palmer-Tomkinson has said that she smashed up her TV after watching EastEnders' Danielle storyline finale.
The 37-year-old socialite admitted she got so angry at the dramatic departure of actress Lauren Crace from the BBC soap that she broke her plasma screen.
"I was so angry she died after waiting six months for that moment," she told the Daily Star.
"I was so pissed off I just threw the first thing I could see at the television. I'm going to sue the BBC for £7,000."
Thousands of EastEnders fans petitioned the BBC following the death of character Danielle Jones.
Executive producer Diederick Santer insisted that he was "proud" of Danielle's final episode and the storyline that preceded it.

Anonymous said…
This comment has been removed by a blog administrator.
Friday, 24 April, 2009

Anonymous said…
Don't blame you, Tara. If every viewer could afford a new plasma screen, there'd be about 10million broken TVs by now!
Friday, 24 April, 2009