Looks like Phil Mitchell could be a right old flop in bed - if Shirley's expression is anything to go by. 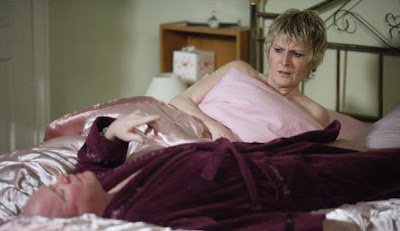 But it's not Phil's performance Shirley is worried about, so much as best mate Heather's reaction when she spots the EastEnders hardman.

Shirley's been supporting Phil during his spiral back to bottle as his family struggles to cope with everything Archie has done.

A drunken Phil has just returned to Shirley's room to spill his guts about an incident with the Brownies.

Worried about Heather's reaction to seeing him there, Shirley tries to get Phil to leave - but he doesn't budge.

Instead of fury, Heather is delighted to see the pair together, telling her pal it's all very romantic.
An Enders insider said: "Shirley wants to be really careful with Phil after their tumultuous relationship so far.

"But with Heather's seal of approval, this could finally be the point where they make it together."
Tune in on April 23