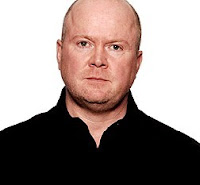 The soap star - who plays Walford hard-man Phil Mitchell - wants his character to realise barmaid Shirley Carter, played by Linda Henry, could be the one.

He explained: "I think Shirley might just be the woman for Phil. The sad thing is that Phil doesn't recognise in Shirley someone he could have a real relationship with. He just sees her as a temporary soulmate and lover - this week's 'new best pal'. He doesn't think of her as special at all."

This week will see the couple getting drunk together and having lots of sex. But Steve says Shirley is throwing herself at the mechanic in the hope he will realise they should be together.
He revealed: "To be honest, I think she feels that if she can't beat Phil, she should just join him.

That's why she starts drinking with him. If she does that, she believes they can be kindred spirits and maybe she can get through to him. Also, Phil's up for it and Shirley's up for it, so they're both getting something they want out of this situation."