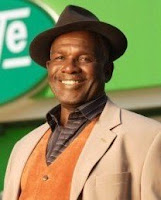 The actor echoes his character - Patrick Trueman - in missing Anglea Wynter, who played Yolande until last year when she left the soap for a new life in Birmingham.
Rudolph said: "I really enjoyed working with Angela, because apart from anything else, she was a tremendous help to me - we've known each other a long time."
Yolande left the soap in 2008 after show producers said they had "run out of storyline ideas" for her character, but said at the time she was not upset to be leaving as it gave her the opportunity to start a new chapter in her career.
Rudolph continued: "I have to be thankful for the time she was in the show, and I'm in regular contact with her. I know she does watch 'EastEnders' and while she obviously misses being part of the cast, she still enjoys it.
"Whether she's keeping an eye on Patrick or Rudolph, I can't be sure!"
Source - Virgin Media
Email Post
Labels: Patrick Trueman Yolanda