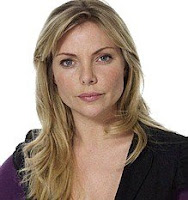 EastEnders star Samantha Janus has admitted that she felt anxious after hearing that Danielle would be killed off.
The actress, who plays Ronnie Mitchell on the BBC One soap, expected a backlash from fans who were hoping for a happy ending to Danielle's seven-month storyline.
Danielle was killed in a car accident last week, just moments after telling Ronnie that she was her daughter.
Speaking about her concerns in an interview with We Love Telly! magazine, Janus explained: "I wasn't sure how the audience would react. I thought if everyone was expecting a happy ending they'd be angry. But I still think it had a lot of impact."
In recent days, thousands of fans have signed an online petition to express their unhappiness over the plot's conclusion.
However, the soap's executive producer Diederick Santer has defended the twist, claiming that it was an "inevitable" storyline move.
Source - Digtal Spy
Email Post
Labels: Danielle Ronnie

Elleece said…
Is it really true that danielle has died in real life or is that just in eastenders i just would like to know? Anyway this is Elleece Yarde ur biggest fan ronnie i think ur beautiful and very gorgous on tv i hope i would like to see u in real life :)
Tuesday, 04 January, 2011