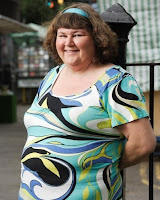 Heather Trott is convinced she’ll be a hopeless mum after a disastrous babysitting stint.

She already fears she’ll fail at motherhood after getting the shock news she’s pregnant.
And a day spent looking after Dawn Swann’s tot Summer only adds to her worries.
Our Albert Square source said “Heather is fretting in the ­launderette as Dawn and Summer drop some washing off.
“And Heather offers to take the kid for a while so Dawn can get some sleep.
“But her time with Summer doesn’t exactly go smoothly when she can’t stop her crying despite trying everything.
Heather admits to Dawn she thinks some women, like her, just aren’t cut out to be mothers and some, like Dawn, are.
“But Dawn is sympathetic and tells Heather motherhood isn’t easy, it’s just trial and error.
Meanwhile Cheryl Fergison, who plays Heather, doesn’t even know herself who the father is.
“I kept going up to our ­producer’s office to ask him,” Cheryl admits. “But he wouldn’t tell me and in the end I realised it was probably best not knowing.
“It’s a bit of a risky storyline, ­because usually Heather’s ­character is the one with all the comedy plots.”
Source - Daily Star
Email Post
Labels: Dawn Heather Trott