Watch out Whitney you've got a stalker! 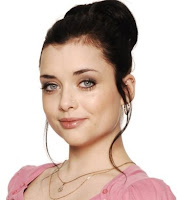 A mystery man turns up in Walford and starts following the troubled teen.
But who is he and why is he trailing her?
Fragile Whitney is already near breaking point after being abused by stepdad Tony and arrested for shoplifting. Now, having a stalker could tip her right over the edge.
Her week starts off well, when Ricky persuades her to go on another date with Todd. But when that goes disastrously wrong, poor Whitney is devastated.
Finding it hard to trust men, Whitney is shocked and upset when she finds a condom in Todd's wallet.
He tries to apologise and says that it was a misunderstanding, but Whitney doesn't want to know.
And when Ricky hears what happened, he confronts Todd in the cafe and warns him off. But mean Lucy overhears everything ­ and teases Whitney about it at school, reducing her to tears.
As Whitney sits alone in the Square, Shirley comes over ­ and tells her there's a young man watching her.
Nervous Whitney sees him and quickly gets up to leave. But as she hurries away, she drops her notebook ­ in which she's written 'I hate everybody' ­ and he picks it up.
When Todd approaches Whitney again later, to beg for another chance, the stalker appears from nowhere and tells Todd to leave her alone.
After sending him packing, the stranger hands Whitney's notebook back to her, but then disappears before she can even ask him his name.
Whitney is left wondering who this guy is - and if he's a friend or a foe.
Source - The Sun
Email Post
Labels: Todd Whitney