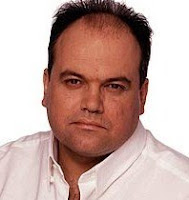 Former EastEnders actor Shaun Williamson has revealed that he doesn't miss working on the BBC soap.
The 43-year-old played Barry Evans for nine years until his character was killed off onscreen in 2004. He then went on to appear as himself in hit BBC comedy Extras alongside Ricky Gervais.
Speaking to the Daily Record, he said: "I don't miss EastEnders at all - I haven't since the day I left. When Barry played an evil s**t it was great, but I wouldn't go back to playing a loser again, otherwise I might as well have stayed."
"I got gobbled up by EastEnders and spent nine years there, which wasn't planned. You just keep re-signing the contracts. I spent a long time on TV and when I left EastEnders in 2003, I couldn't wait to get back to doing comedy on stage."
Despite his reluctance to return to the Walford soap, Williamson admitted that he would "jump at the chance" to play a villain in ITV1's rival soap Coronation Street, saying: "Just to do something really evil like kill someone would be fantastic."
Williamson is currently playing the role of Ron Freeman in the Take That musical Never Forget.
Source - Digital Spy
Email Post
Labels: Barry