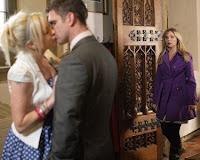 Devastated Ronnie is set to leave Walford as she heads for the airport with her bags.
But Jack is in hot pursuit and makes a last-ditch attempt to get
her to stay!
The last straw for Ronnie comes when she walks in on Roxy kissing Jack at Amy's christening. Devastated by their betrayal, Ronnie again finds herself pondering suicide. She returns to The Vic and grabs a bottle of vodka and a handful of pills!
"Poor Ronnie is in a dark place," says Samantha Janus, who plays her. "She has gone into a tailspin after Danielle's death. She still loves Jack and can't bear to see him with her sister. It's the ultimate betrayal."
As Ronnie steadies herself to take an overdose, Phil walks in ­ and laughs!
He calls her a hypocrite and it¹s the wake-up call Ronnie needs ­ so she packs a bag and leaves for the airport.
"Ronnie can't be around if Roxy is going to be with Jack and Amy, because that's what she wants," says Samantha. "Ronnie wants to be with Jack and bring up his baby." When Phil tells him where she's gone, Jack races to the airport and broadcasts a message across the tannoy, telling Ronnie he loves her!
"I can't tell you what happens," adds Samantha. "Ronnie is a bit unhinged at the moment, so Jack's going to have to be patient!"
Source - The Sun
Email Post
Labels: Jack Phil Mitchell Ronnie Roxy