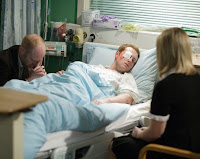 Bradley is left blind and clinging to life when a huge gas explosion rips through the cafe!

The horrific blast is down to - who else? - Walford's most evil man, Nick Cotton.
It comes as Nick attempts to skip town after his plan to murder Dot by getting Dotty to poison her drink blows up in his face.
"Nick is desperate to get his hands on Dot's house and all her money," says John Altman, who plays him. "When he sees her lying on the sofa, he thinks she's dead!"
Nick celebrates with a swig of beer, but starts to feel woozy. He quickly realises his daughter has drugged him, not Dot!
Dotty scarpers to the launderette, where she tells Dot about Nick's plan.
"Now his secret's out, Nick has to get away," explains John. "He takes Dotty with him - but he's totally out of it and crashes the car."
Nick dashes into the cafe and takes everyone inside hostage ­ including Heather, Bradley, Syd, Whitney and her stalker. He refuses to let them out until someone gets him another car.
When a fight breaks out between Nick and Whitney's mystery man, Bradley helps everyone to safety. But they don't see that a fire has started on the cooker.
As the flames take hold, Nick is still inside. Brave Bradley goes back to save him, but they both end up trapped!
"Nick goes to the back entrance to escape," adds John. "But then there's an almighty explosion!"
Bradley, unconscious and with his right eye damaged by shards of flying glass, is rushed to hospital, where Max keeps vigil.
Will he recover - and if he does, will his sight come back? And where is Nick?
Source - The Sun
Email Post
Labels: Bradley Dot Max Nick Cotton