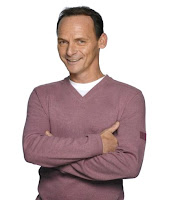 EastEnders bosses have this afternoon denied reports that long-standing Walford actor Perry Fenwick has been axed from the soap, Digital Spy can confirm.
The People today claimed that the 47-year-old, who has played unlucky in life Billy Mitchell since November 1998, is to be written out of the show in "explosive style" as producers "feel there is nowhere else for his character to go".
However, DS can confirm that there are no plans for the Mitchell cousin to be axed, nor does Fenwick have any plans to quit the show.
A spokesperson this afternoon told DS: "Perry Fenwick as Billy Mitchell is a fantastic character who has been with the show for nearly 12 years. He is a key part of life on the Square and hugely valued - there are no plans for him to leave."
A source added: "Perry has some great material coming up over the next few weeks and his long-term storylines are looking very exciting. He's very much part of the makeup of the show and he's very proud to be a member of the Mitchell clan."
Source - Digital Spy
Email Post
Labels: Billy