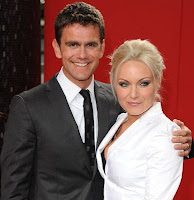 EastEnders star Scott Maslen has suggested that his character Jack Branning could be the father of Heather Trott's (Cheryl Fergison) baby.
Speaking to DS on the red carpet at the British Soap Awards, Maslen said of the prospect: "Yeah, I reckon [Jack's the daddy]. I think I'm sleep walking!"
Rita Simons - who plays Roxy Mitchell - joked: "I think it was Albert...Oh no, I had his willy cut off..."
Meanwhile, speaking about Danniella Westbrook's return as Sam Mitchell, Simons said: "[It'll be] brilliant, bring it on! It'll be amazing because hopefully it'll be another person to add to the dynamic that me and Sam have already got."
Responding to a comment made by the show's boss Diederick Santer in a recent interview with DS, Simons added: "He called us a pair of pretenders! You've just reminded me, because I have a bone to pick with him. When I see him he's going to get a piece of my mind! Pair of pretenders?! Yeah..."
Source - Digital Spy
Email Post
Labels: Jack Roxy