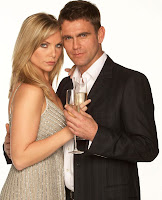 Scott Maslen who plays Walford womaniser Jack Branning reckons his relationship with co-star Samantha Janus is just as fiery off-screen.
The 37-year-old actor says he and Sam, who plays broody Ronnie Mitchell, are both bossy in real life - and have even been known to fight over who gets the better chair.
Ronnie and Jack have had volatile relationship on screen - with Jack been found as the father of Ronnie's sister Roxy's baby Amy and his reluctance to commit to Ronnie.
Scott said: "Ronnie and Jack are competition for each other; they both want to be in control.
"Sam Janus and I even have this when we are not acting - we argue about which chairs we sit in."
The two soap stars, who have known each other since they were teenagers, have been friends for years and Scott is even godfather to Samantha's two young children.
Source - The sun
Email Post
Labels: Jack Ronnie