Larry Lamb getting the chop 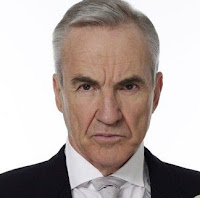 EastEnders star Larry Lamb is apparently being axed amid cast fears that bosses want to save money.

Larry's, who plays evil Archie Mitchell, will reportedly leave the BBC One soap as bosses reckon his character has run his course, according to The Mirror.
But an insider told the paper that stars think the move is really a cost-cutting exercise, saying: "These are difficult times. Everyone's keeping their heads down and hoping they still have a job at the end of each month."
In March, it was reported that Kara Tointon and Ricky Groves - aka Dawn Swann and Garry Hobbs - were being written out.
Barbara Windsor, who plays Archie's screen wife Peggy, claimed that budget cuts were spoiling the soap.
She said: "I think we're missing out on some of the things that made EastEnders so special. But we have to consider ourselves lucky to be in work at the moment."
Evil Archie fled from Albert Square on his wedding day after Peggy learned the truth about his manipulative ways - not least lying to daughter Ronnie that Danielle, the child she put up for adoption, was dead.
Archie returns to the soap next month - but his stay will be short.
Another insider said: "After the things he's done, there's isn't much more the writers can do with him he's peaked."Everyone thinks Larry is great, but for storyline reasons he's got to go."
Source - Whats On Tv
Email Post
Labels: Archie

Anonymous said…
writing out all the best characters! what is wrong with eastenders!