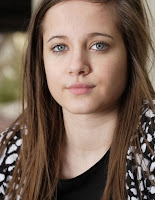 Madeline Duggan has admitted she is sick of her EastEnders character being miserable.

The actress's soap alter ego Lauren Branning has had a horrid time of late, having tried to run over her father Max before mum Tanya took the blame - and was also paedophile Tony King's next target after Whitney.
"I want her to be happy now," said Madeline.
The 14-year-old actress continued: "It's not fun (to) keep crying every night and everyone thinks I am miserable.
"They come up to me in the street and are like 'are you really that miserable and horrible?' and I am like, no!"
Source - Virgin Media
Email Post
Labels: Lauren