Mitch in trouble with old Bill 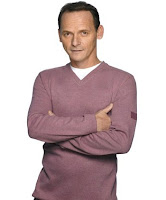 Weedy Billy Mitchell gets a visit from the old Bill after receiving a brutal battering in EastEnders.

Poor Billy who is on the witness protection register for seeing Jay's dad Jases' bloody death at the hands of Terry's gang, is refusing to give evidence after the same gang reveal they are holding adopted son Jay hostage.
house and sees Jay lying on the floor with his hands strung together with a tie.
Gang member Bird soon appears and beats Billy up.
Luckily for Billy, an ambulance and police car is called just as Bird readies himself for another attack on him.

Garry, Minty and Dawn are shocked when they see a limping Billy emerge from the house with blood dripping down his head.

Click Here For Pictures
Billy gets into bother, Friday 29 May on BBC One
Source - The Sun
Email Post
Labels: Billy Jay