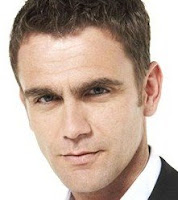 The 'EastEnders' actor - who plays nightclub owner Jack Branning in the soap - says he finds it awkward to passionately kiss his co-star, who plays his love interest Ronnie Mitchell, because she is friends with his wife Estelle.

He said: "It's been so weird working on those scenes. We've got loads of bedroom stuff coming up, and some if it's pretty risque!

"I don't like to make a big deal about these things, but Sam ends up telling Estelle all about it!"

Despite his steamy scenes, Scott, 37, insists Estelle - mother of his eight-year-old son Zak, who he married last September - is the only woman for him.

He added: "We don't need big romantic gestures - our future is the most romantic thing there is. I love the life I have with Estelle and Zak - I'm so happy right now."