Simons: 'I get told off for laughing too much' 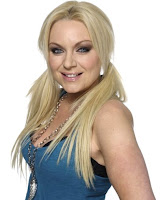 EastEnders actress Rita Simons has revealed how co-star Scott Maslen's "raucous behaviour" gets her into trouble on set.
The 32-year-old - who plays feisty Roxy Slater in the BBC soap - jokingly blamed Maslen's (Jack Branning) comedic nature as the reason why she and screen sister Sam Janus (Ronnie Mitchell) are sometimes sent off set for laughing too much.
Speaking on tonight's Paul O'Grady Show, Simons joked: "I love Scott, I love Sam...I love them all. When you work with Scott - and anyone who works at EastEnders will tell you this - it's just raucous.
"The guy has you on the floor in fits of laughter the whole time. And me and Sam [Janus] are both constantly [getting] sent off set because we're laughing too much [and] we get told off."
She continued: "I got told by a certain someone upstairs the other day 'it's very nice, it's a lovely atmosphere at work and...they’re glad we're all having a laugh, [but that] me and Scott are a little bit hyper'. It's brilliant."
Simons went on to admit that despite her character's "unflattering" and "teenage" dress sense, she happily continues to wear skimpy dresses to remain true to her character.
She said: "I kind of embrace it...You know that's how [Roxy]'s supposed to dress - she thinks she's a teenager. So when costume come to me with these ridiculous outfits…I don't ever [say] 'it's not very flattering'. I know I look a little bit weird in some of them and they don't fit properly, but that's what [Roxy] would do."
She smiled: "She would squeeze into things that don't fit her, so I relish it and just go with the flow, because the more ridiculous the costumes, the better Roxy is."
The Paul O'Grady Show airs tonight at 5pm on Channel 4.
Source - Digital Spy
Email Post
Labels: Jack Ronnie Roxy