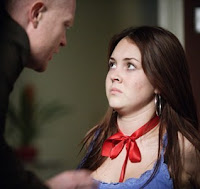 Desperate Stacey Slater has a sexy treat in store for Max Branning next week – when she surprises him by sneaking into his bed, wearing a saucy red bow

The Albert Square minx, played by Lacey Turner, is on a downward spiral after the death of her best pal Danielle.

Next Thursday she causes a scene when she arrives at Tanya’s salon Booty in a strange mood – and starts throwing products around when she can’t get an appointment.

And on Friday she seems determined to rekindle an affair with Max after finding out from Bradley that he’s getting back together with wife Tanya.

Forming a plan, Stacey pockets Bradley's house keys and then barges her way into Tanya’s and claims she’s having it off with Max again.

When Tanya tells her she was just a cheap little fling, she shows her the keys and says Max gave them to her – making Tanya believe her lies.

Later when Max gets home he’s shocked to find Stacey in his bed – and throws her out, furious she’s trying to ruin his chances with Tanya.

Meanwhile, things take a turn for the worse back at the Slater’s when Charlie kicks Stacey out for not paying the electricity bill.

Worried mum Jean then shows Stacey all the clothes she’s recently bought – and tells her she thinks she might have bipolar disorder.

Watch EastEnders next week on BBC One.