Tointon: 'I cried over Walford axe' 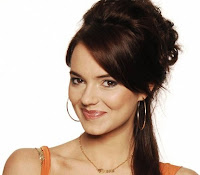 EastEnders star Kara Tointon cried after being axed from the BBC soap, she has admitted.

The actress was last month told that her character Dawn Swann would be written out of the programme. Ricky Groves, who plays her on screen partner Garry Hobbs, is also on the way out.
Reflecting on the decision, Tointon told the Daily Star: "I was heartbroken when they told me and I have to admit I did cry.
"I just have to dust myself down and get back out there. I've already told them that if they do plan to kill Dawn, I will refuse to close my eyes in the dying scenes!"
Recent reports have claimed that Tointon will star in the new series of Strictly Come Dancing in the autumn.
Source - Digital Spy
Email Post
Labels: Dawn