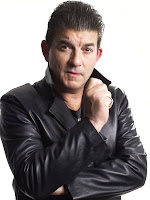 John Altman has admitted that his EastEnders co-star June Brown is like a "second mother".
The 57-year-old, who plays Brown's screen son Nick Cotton, revealed that the veteran actress stood by him when he battled alcoholism in the '90s.
Altman starred alongside Brown, better known as Albert Square legend Dot Branning, from 1985 to 1993 before making further appearances in 1998, 2000 and 2001.
In October last year, it was announced that he would return to the BBC One soap once again after the actress called for another comeback.
Speaking to the Sunday Mirror, Altman explained: "I call [June] my second ma because that's exactly what she is. My real mum doesn't mind. She knows I love her to bits and though they've only met once, they got on really well.
"June was a great person to turn to when things were getting bad. I can tell her anything in confidence. I respect her opinion as an actress, too. And she cares about me. We have a good laugh together. The darker the plotlines get on screen, the more of a giggle we have on set."
Altman's alter-ego Nick will lose the plot in an explosive hostage storyline on Tuesday.
Source - Digital Spy
Email Post
Labels: Dot Nick Cotton