Westbrook 'not nervous' over soap return 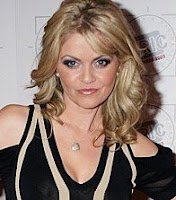 Danniella Westbrook has insisted that she doesn't feel nervous about her return to EastEnders.
The actress announced in April that she was reprising her role as Sam Mitchell on the BBC One soap. She will film her first scenes next week.
Westbrook made her debut as Sam in 1990 and stayed in Walford for three years. She returned in 1995 and 2000 but was dropped from the programme on both occasions due to her drug addiction and other personal problems.
Speaking to The Mirror, she explained: "The person I was when I last left was sick - it wasn't the person I was when I first joined in 1990 and I had several years of doing good work before I got ill. People remember the horrific times.
"But I'm not nervous. People keep saying that everyone is worried about how I'm going to cope but I'm a 35-year-old wife and mother, and I cope on a daily basis. I've had eight years of being clean and steady, and my family are all behind me because they know it's the right time."
Discussing her hopes for the comeback, she revealed: "It'll be great closure for me to finish something I started. It's also important that cast members who I let down when I was using drugs see me in a different light. I have to earn their respect back."
Kim Medcalf was the last actress to play the part of Sam, appearing on the show from 2002 to 2005.
Source - Digital Spy
Email Post
Labels: Sam Mitchell